The park is situated among rolling hills and a residential and semi-rural area of Moraga. It’s a big park, and the remote setting makes it feel even bigger.

Here’s a look at some of the features of Rancho Laguna Park.

Rancho Laguna Park is a great place to take kids. It has a large and relatively newly-built playground. The playground is fenced, which makes it easier to keep track of your little kids, and also keeps the dogs that frequent this park out of the playground area.

Rancho Laguna‘s playground has one of the tallest treehouse features I’ve seen at a kids’ playground. Kids can climb up almost 2 stories into the air. There’s a giant slide that will take them all the way down to the ground level. The top level of the treehouse is entirely enclosed, so even at those dizzying heights it feels relatively safe. I would definitely supervise smaller kids very closely on this play structure, though.

The playground also includes basics like swings and other features. The material on the ground is tan bark. It’s a cool place to take kids, and since Rancho Laguna is usually quieter than Moraga Commons, it’s also a great place for a bigger play date.

You can also show up and picnic more casually at the park. If you’re planning to do a big function, though, I’d recommend reserving the facilities. They’re right adjacent to the playground, making them a great place for a kid’s birthday party. One thing to know is that the picnic area does open to the rest of the park, so it’s possible you’ll have curious dogs wandering in to check out your picnic.

Rancho Laguna does not have a dog park, but it does allow you to go off-leash with your dog during certain hours and certain times of the year. At least 15 dogs played and cavorted off leash in the massive field that anchors the park when I visited.

Here are the off-leash hours/times of year as I write this:

This might come as welcome news to you, or less welcome news. If you’re looking for a big place for your dog to run around off-leash, Rancho Laguna definitely fits the bill. If you’re trying to avoid dogs, though, this is probably going to be a challenging park to hang out in. Dogs will likely come up to your kids (again, the fence around the playground helps with that) or your smaller, more skittish on-leash dog.

One of the coolest features of Rancho Laguna Park is a monarch habitat and demonstration garden. The garden is 2600 ft², and provides a habitat for pollinators like monarch butterflies. The garden is fully enclosed and features over 600 plants, including 95 native varieties. This provides educational and artistic benefits. It also demonstrates the use of drought-tolerant plants, which many people in the Bay Area use for their lawns.

The garden is maintained and made possible by the Moraga Garden club. When you visit, you may see a wide variety of beautiful blooming flowers, as well as potentially butterflies.

Rancho Laguna has relatively nice bathroom facilities. There are flushing toilets and running water. The park has both men’s and women’s restroom facilities. Good bathrooms are relatively rare in a park with such a remote setting, so that’s a definite benefit.

Rancho Laguna also has parking, but it’s relatively limited. You may struggle to find a parking space during busy hours, or if a large event is taking place. If you do find parking, it’s quite convenient to the rest of the park. The park has a parking lot that’s easily accessible from the street.

Rancho Laguna Park has a variety of other facilities that residents and visitors can use. There’s an amphitheater at the park that you can visit, and where the city sometimes holds events. You can also find various public art displays there.

If you’re having a picnic or hosting a party, one other nice feature is that you’ll find barbecue pits and grills at the park. You can bring charcoal and grill as part of your event. That can help to keep catering costs down!

There are trail entrances at the park too. You can hike on some of the East Bay municipal utility district trails, leaving right from the park.

Another cool feature of the park is the fact that part of the playground has a train theme. This is the part that’s oriented towards little kids. There’s a train that they can play in, as well as a pretend railroad station. The station has signs for the Sacramento Northern Railroad, and lists a pretend train schedule with various times and other area destinations listed.

Your kids can pretend that they are taking a train to San Francisco, Sacramento, or Walnut Creek. A historical marker talks about the historic freight railroads at once served this area of Moraga.

As you’re probably getting from this review, Rancho Laguna Park is great for both kids and dogs. You’ll have to drive quite a ways to get to it, especially if you live outside Moraga. The secluded location, off-leash dog area, as well as the nice playground make it worth the trip, though.

Definitely check out Rancho Laguna, especially if you’re finding Moraga Commons or other big parks like Heather Farm too crowded. 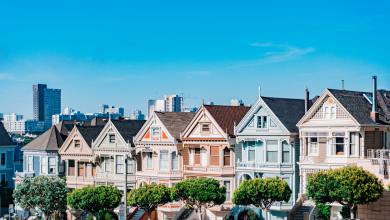 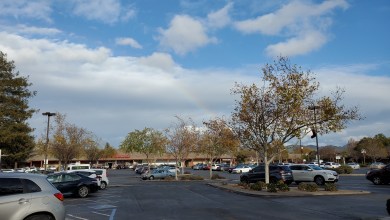 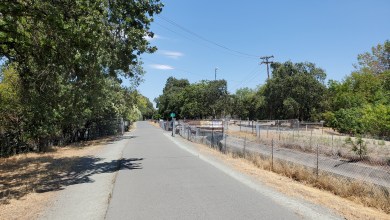 Walk With Me on the Contra Costa Canal Trail 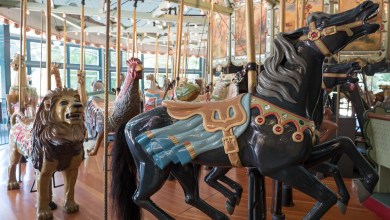 The Tilden Park Merry Go-Round; Everything to Know