I love a good macaron; the daintier the better. Sure, these colorful little treats aren’t the most stereotypically masculine item. But who cares? They’re delicious and delightful.

The Bay Area has tons of great macaron places. The best macarons in the Bay Area are at Reve restaurant in Lafayette, California, but there are lots of other ones that make my list.

Chantal Guillon specializes in tea and macarons. If that’s not a winning combo, I don’t know what it is.

This dedicated macaron restaurant has two locations, one in San Francisco and one in Palo Alto. At each, you’ll find large display cases filled with row upon row of macarons.

Chantal Guillon has classic flavors like vanilla and strawberry, but they also have a rotating selection of often-bizarre ones. Olive oil, strange mixes of lavender, and other unique flavors feature prominently on their menu.

If you’re a Bay Area macron lover, Chantal Guillon is definitely an essential place to visit.

Reve bistro in Lafayette is incongruous in so many ways. The French bistro is located in a nondescript strip mall on Moraga Boulevard in Lafayette. Yet once you’re inside, both the food and the atmosphere evoke a little Parisian bistro.

Reve is a fantastic place to go for dinner. But after you finish that dinner, you’ll definitely want to follow up with some macarons for dessert.

Reve has the best Macarons in the Bay Area. Their macarons are smaller than the ones you find in many other places, and the outsides aren’t as flaky and crispy. That makes for the experience of eating something more kin to a delicious, cakey brownie, except with the traditional macaron fillings.

It’s a fantastic combo and a delightful evolution from the traditional macron. I’m not the only one who thinks the Reve’s food is fabulous. The Michelin guide’s inspectors paid Reve a visit last year, granting it Michelin Plate status. Could a star be on the way?

Reve is also a black-owned business, which is all the more reason to support this local gem.

Because macarons are made with almond flour, they’re a popular treat on the Passover table in the Jewish faith when anything made with leavened flour is banned.

Tal’s patisserie in Danville, California serves great macarons during Passover, and throughout the year as well.

Tal is from Israel, and her food is very authentic. Her eatery is a small, local business that’s very much worth supporting. For a Cocomelon-themed party for my son, Tal even made custom order watermelon Macarons. They were delicious.

Tous Les Jours is a hybrid of a French and Korean bakery. The melding of Asian and French flavors makes for some delicious pastries.

It also makes for some unique macarons. Tous Les Jours’s macarons are best when they evoke flavors from eastern cuisines. Their macarons that use rosewater, for example, are especially good.

Bouchon has some of the fanciest macarons in the Bay Area. Bouchon Bakery is part of Thomas Keller’s family of restaurants, which includes the iconic French Laundry and the Michelin-starred Bouchon.

Bouchon Bakery sells Keller’s baked goods. It’s a great choice if you want to try Keller’s food without paying a fortune or battling for a reservation. Although Bouchon Bakery’s treats aren’t cheap, they’re delicious and much less than a meal at any of Keller’s restaurants.

I love Bouchon Bakery’s classic macarons, but they also offer giant macarons that are tasty too.

This one might be a controversial choice. Most people don’t think of supermarket baked goods when they think of quality or uniqueness.

But in the Bay Area, Whole Foods sources their macarons from L’Artisan, a local company that sells exclusively through gourmet supermarkets and online, and doesn’t have a physical presence of its own.

L’Artisan’s macarons are tender, fresh, and delicious. They come in classic flavors, and I love how accessible and easy to find these are. I get mine at Whole Foods in Walnut Creek.

Le Marais bakery in San Francisco has all manner of tasty baked goods. They’re not fancy per de—they’re just classics done extremely well (and served with excellent coffee.) They come in a variety of vibrant colors (see image at top.)

The Bay Area is a macaron lover’s paradise! From supermarkets to bistros to dedicated macaron restaurants, we have it all. Check out any of these places for delicious, dainty macarons any time of the year. They’re especially tasty to serve around the holidays, too. 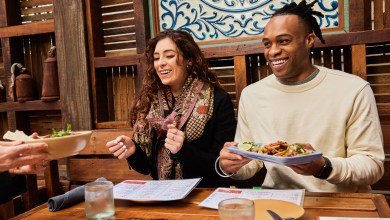