Last year, Nike announced that it would open a new store at City Center Bishop Ranch in San Ramon. As of earlier this year, Nike’s new San Ramon location is officially open.

The store is officially known as Nike by San Ramon. When I first saw it under construction, I expected that I would fill a large retail space on the bottom level of City Center. It turns out the Nike by San Ramon is deliberately a much smaller store.

According to Nike, the goal of the store is to create a community-centered space to experiment with different Nike products and services. The company describes the store as a laboratory model focused on fitness.

You’ll definitely find shoes at Nike by San Ramon. But you’ll also find athletic apparel, other clothing, and different ways to get involved with Nike’s digital offerings. For example, the store offers a 10% discount to people who run 10 miles, tracking their run with an app from Nike.

According to the City Center website, the store is “Designed to be lab-like space where Nike tests and evolves new services, experiences and offerings—Nike by San Ramon offers digital and convenience-led services that help consumers discover the best of Nike online or in-store at their pace.”

As the store gets more established, it’s likely that it will begin offering more community centered programming, too. There are already some quirky touches, like a wall that features photos of dogs, perhaps those of the stores employees.

I visited Nike by San Ramon recently. The interior is light and airy, and you can tell that this feels different than your typical shoe store. It seems to capture more of the aspirational aspects of the Nike brand, and invoke the concepts of running that Nike embodies. It seems tailored towards creating an experinence of the brand, rather than just trying to sell you shoes or some yoga pants. 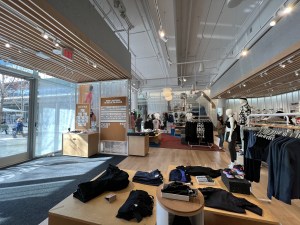 I’ll be interested to see how Nike by San Ramon develops. If you’re at City Center Bishop Ranch, look for the store on the lower level, right by Alexander Square, and across from City Center’s many excellent restaurants.

Interested in other new openings in the East Bay? A new Savers is coming soon to Walnut Creek, and Dumpling Time recently opened at City Center.